The fourth episode of the anime and which consists of 4 parts.

Sena comes to ask Yuuki to pay the charge for working, but Yuuki already spent all his money. Because he doesn't have money and he made fun of her last time, she gives Yuuki punishment.

It seems that cute mascot characters are really populair right now, so Mihari, Yuuki and Ashisu decide to think one for Yuuki's manga. 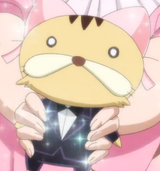 They decide on the character Branya.

While walking on the street, Ashisu asks Mihari how she met Yuuki and Mihari tells how they met for the first time in high school.

Community content is available under CC-BY-SA unless otherwise noted.
Advertisement